The immediate proximity to the city centre of Bolzano, the Fair complex, the highway and the airport of Bolzano, turn Hotel Rotwand into the perfect accommodation for tourists and business travellers.

The Fair of Bolzano, which is one of the most popular fairs in Europe, is located just 5 km from our hotel and can be easily reached by car as well as though the public transport service. During the whole year, you can visit both regional and international trade fairs.
In addition to that, the fair complex is not far from Bolzano’s city centre.

After a stressful days, you can relax in our garden or enjoy the our new swimming pool.

Hotel Rowand, only 5 minutes from the Bolzano Exhibition Centre! 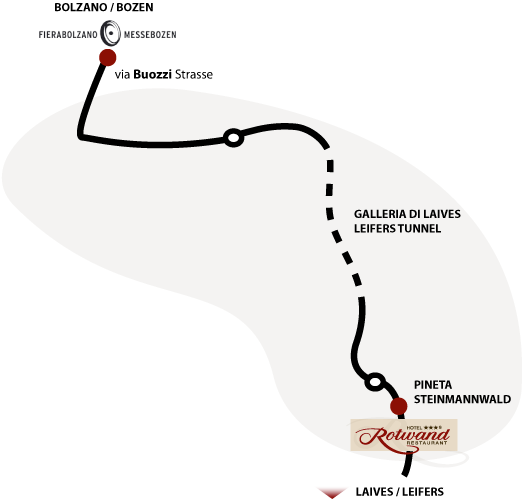 The Bolzano Exhibition Center is a national trade fair based in the Bozen Süd trade zone (former Bolzano industrial zone). For the entire European Alpine range, it sees itself as the most important contact exchange between companies from the German-speaking countries and Italy. The trade fairs and congresses focus on Alpine economic issues. For the development strategies, Messe Bozen uses distinct areas of expertise from the Trentino-South Tyrol region. The focus topics leisure, agriculture, gastronomy, tourism, education and special alpine industrial topics meanwhile attract over 3,000 exhibitors and 230,000 visitors from all over Europe every year.

The large fairs, which have established Bozen’s reputation as an intersection between the commercial centers of Venice and Augsburg since the Middle Ages, are considered to be the forerunners of the Bozen trade fair. For the first time around 1450 these fairs were called “fair”. From 1635 to 1851 there was a separate mercantile magistrate in Bolzano, which acted as a commercial court during trade fairs and was subsequently replaced by a chamber of commerce. In 1948 the first modern fair, the so-called model fair (now the autumn fair), was held. The symbol of the fair at that time, a gentian with various national flags as petals, stands for the international orientation of the Bolzano fair. The first model fairs took place in the court square, which soon became too small. Therefore, the exhibition grounds in Romstrasse (district of Europa-Neustift) were acquired in 1951 and moved into in 1952. Various special trade fairs were set up in the 1970s, starting with the Alpine Agricultural Show (now AgriAlp), which is organized every two years. In 1998 the fair moved to its current location, where 25,000 m² are available in the multi-purpose hall and 15,000 m² of open space. Since its foundation as an autonomous corporation under public law, the fair was constituted in early 2003 as a public limited company, the main shareholder of which is the Autonomous Province of Bolzano (62%); other shareholders are the Trentino-South Tyrol region (21%), the Bozen Chamber of Commerce (4%), the Bolzano municipality (5%), the Hotel and Restaurant Industry Association (HGV), the State Association of Craftsmen (LVH) and the Trade and Service Association South Tyrol (hds).

We use cookies to ensure that we give you the best experience on our website. If you continue to use this site we will assume that you are happy with it.OkPrivacy policy